I have an American perspective, so the things that I found novel may not even resonate or make sense to the brits.

It was like a weird dream for me to see this scene in person, thriving, listening to the same music I started listening to 14 years ago, just me and some college friends listening to Sub FM when it felt like no one knew about it. Obviously, people have always known this music - the UK has a whole history of rave and drum and bass going back further than my perception, but in the US, most "music people" treat any form of electronic dance music as low-brow, or low-effort. Not as an art form. Somewhere down the line, giant portions of the American population forgot how to dance. I believe if no one's dancing to your music, you're doing the music wrong!

In the states, few people have heard of Goldie, but probably more because of his relationship with Björk than what he represents.

I love modern Jamaican music, and I am definitely an outlier in NYC. I'm just some white guy who started listening to Vybz Kartel and Gaza Slim in 2012, I make mixes on my own and it would almost feel wrong to even play out in New York. This is not my music, and I didn't grow up with it. I'm not Jamaican - I only know a few other people of my demographic in new york (the Mixpak people) who are into this sort of thing. There are tons of Jamaicans and the diaspora in New York. I see dancehall artists when they come through new york - Kranium and Spice. One of my favorite singers, Gaza Slim, or her new persona Vanessa Bling, just came through the city. But I didn't even attend because I didn't want to intrude! I could tell that show was really for her community - her Jamaican people.

In contrast, at Outlook, I found it interesting to see Jamaican flags everywhere, people drinking Red Stripe, jamaican themes throughout the festival, obviously through the connection of Dub music. Because I'm a white guy who loves this sort of music as well, I immediately felt a kinship with everyone. At the same time, this was definitely a white-dominated festival - we're in the north of England for sure.

This is a social music scene that must be experienced in person, and it can feel at times it's about even more than just the music. Similar to our American scenes in grunge/punk rock, hip-hop etc. Wherever you come from, you can say, "I'm not that into drum and bass, or dub", etc.. based on a few listens on spotify or something. I'd like to see those same people see Bailey at 3am in a tent in Cheshire on a proper soundsystem, or feel the audio/visual experience of 100 or so people dancing to a dub riddim between a bunch of hay bales. It's not even about the music anymore, it's about how we relate to each other as people. Bass connects all of these, as the central part of all of this music.

Why do people make music? Is everything we make artificial? From the sound of our voice to waves from a speaker, you can call it all man-made. These artificial sounds of drums and bass sound completely natural in a field overlooking an ancient castle. Even though it was produced in a studio, there's a feeling that this is how the sound was meant to be heard. 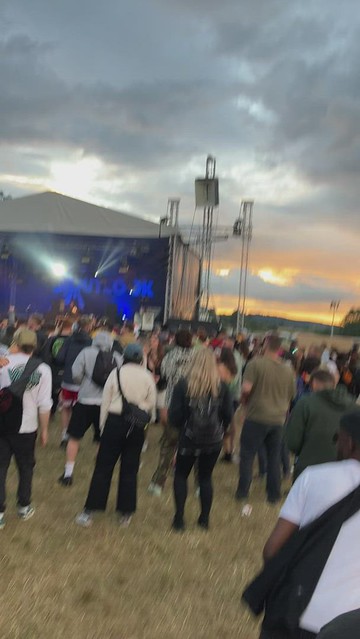 Loud music sounds different on a good soundsystem in the UK. I've seen plenty of music in the states that just hurts your ears - way too much treble, you can't even have a conversation. That's the first thing I noticed when I came to London in 2017 and went to some rooftop parties in Brixton and Dalston. 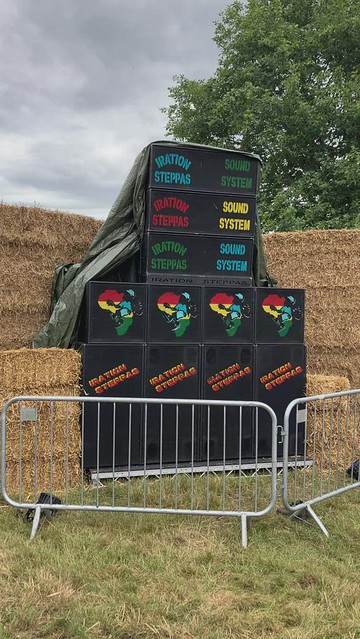 The shared connection between performer and audience was top-tier during the daytime sets. 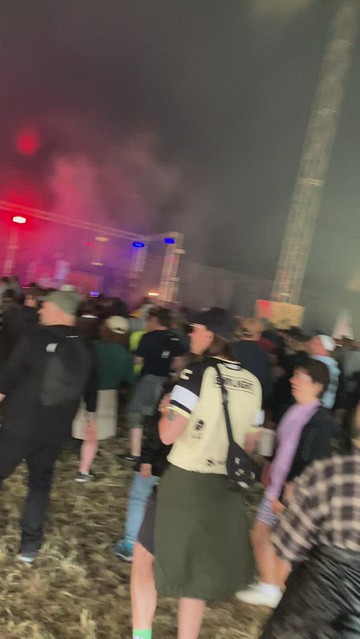 And every night, the mood shifted, generally to something darker, more lunar and drum-n-bassy. But depending on your stage (whichever sounds you followed) you could always find the right vibe, like this classic piano-driven rave tune from Naina with rolling drums, the moment I felt like I finally understood what Burial meant when describing these drums as "the UK sound", and associated as much with melody as rhythm: 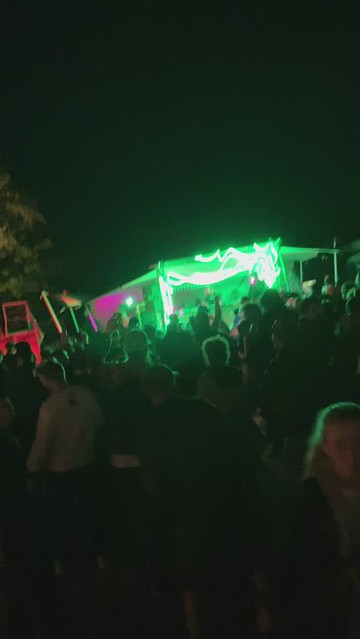 Followed by Kode9's experiments on the dancefloor, or... the field. 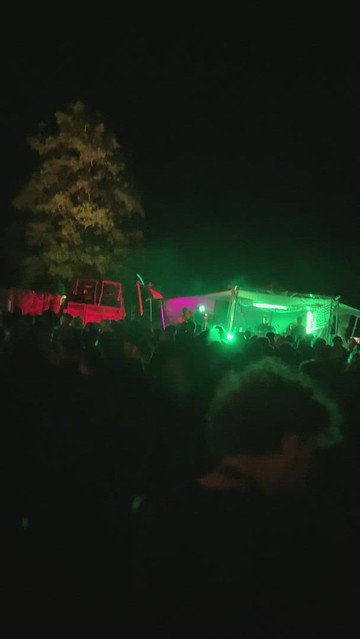 I heard a few murmering complaints about the bleed-over of sound between the eight stages, but being able to follow the bassline into a new scene was a central part of the festival. Once completely enveloped, I never found myself distracted by sounds coming from elsewhere - well, unless I was at the Sinai soundsystem - they unfortunately had some well-known issues over the weekend. This co-existence (or chaos, if you're a glass-half-empty person) of sounds is how it should be - just like the streets of New York.

Something else that struck me and another American I met (DJ Sister Gaia from New Jersey), the whole festival did not feel male-dominated at all - so many female DJs and attendees. That was notable to us cause in the states, anything close to this kind of music still feels heavily male-dominated. A drum-and-bass show in Brooklyn is going to be primarily a party for guys.

My favorite memory? Waking up at 6am, last night of the festival, freezing cold in my tent cause I forgot to bring blankets (it doesn't cool off at night in New York), it's already light out, and some people who've been up all night are singing along to "Better Off Alone". Then I somehow fell back asleep. 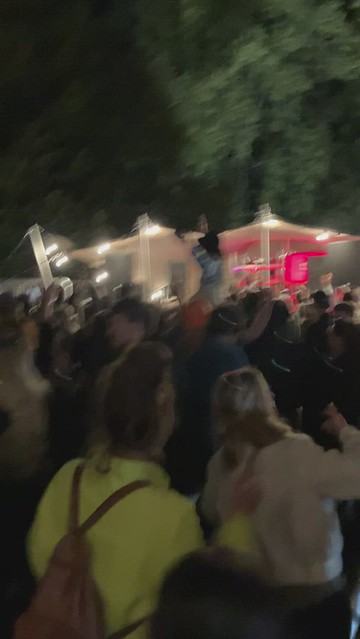 this is really how you play. im still stuck in the playing manually, clicking around the screen mindset. i need to automate this.

In Unix, there's a write command that lets you send messages to other users logged in to the system. In Debian, a version of this command is included in the bsdmainutils package. I'm lucky enough to know people that like to communicate with me this way.

It's a known bug that write only supports the basic characters that are part of ascii. So you can't use all the characters of different languages like Danish or Spanish.

The write utility does not recognize multibyte characters.

You can fix this by changing the character buffer to use a multi-byte type instead of the old-school 8-bit char. Details are here.

There are still some improvements that I need to make with this patch. wchar_t isn't ideal for UTF-8 data, though it works. Apparently it's better (i.e. possibly more portable in the long run) to use char16_t or char32_t, including uchar.h instead of wchar.h. https://stackoverflow.com/a/527307/173630 Also, I need to investigate some interactions between this patch and how it's displayed over ssh when you're connecting through Mac OS X.

Y st rday I was working on a bug that was kind of int r sting. Sinc my fri nd Tony was talking about writing an articl for his blog, I thought I would writ down what I'v b n doing h r .

I thought, "Gr at.. I'v found th probl m. I'v s n this b for it must b an infinit loop." I sp nt a f w hours trying to fit th r cursiv loop into my h ad – what is it actually doing, and what sp cial stat m nt should I nt r to just br ak out of it, in this sp cific cas ? All th s strang scripts must b trigg ring an unhandl d cas in Libr JS.

But r ddit was loading fin in Mac OS. That was an important point that I had forgott n about. Mayb "Too much r cursion" just m ant too much r cursion for this sp cific syst m, and th loop wasn't actually infinit . Aft r r ading mor about this JavaScript rror, I found that using can r s t th call stack. I tri d this out, and it work d.